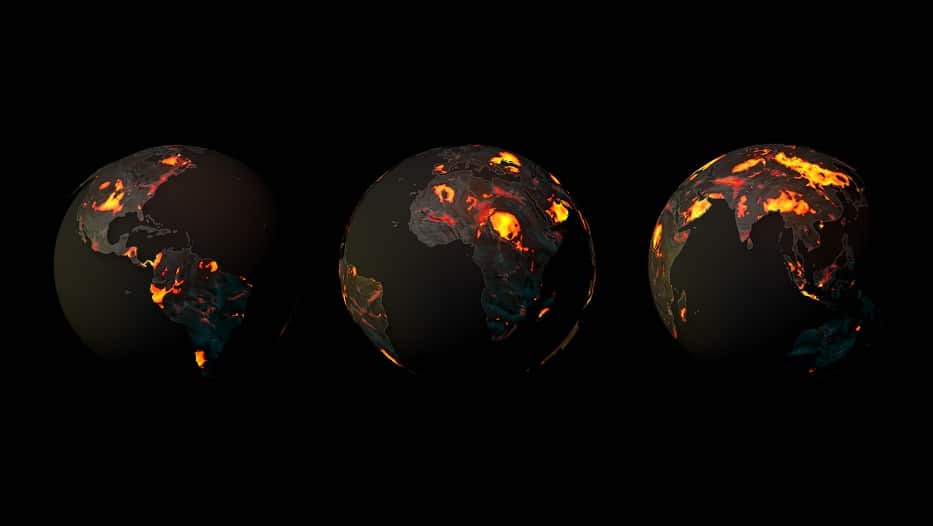 Fire prevention and management from space

The increasing duration of wildfire seasons and the severity of the fires are problems of increasing global impact and consequent concern. In the search for possible mitigation solutions, remote sensing has become a promising tool for environmental management and preventing forest fires. We discovered how these techniques can help detect, monitor, and mitigate fires.

Forest fires are a determining factor in environmental transformation for a wide variety of global ecosystems. This is because they have a global impact, such as on the balance of greenhouse and regional gases, soil degradation, or the loss of biodiversity. In recent years, there has been an increase in the negative effects of fire due to the sum of natural conditions, human activity, and the impact of global warming, among other factors. This could increase the intensity and duration of wildfire seasons. That’s why detection and management components are essential nowadays.

In recent decades, the use of data provided by Earth observation satellites for the prevention and evaluation of forest fires has grown exponentially. Remote sensing models provide meteorological, climatic, and hydrological information to define conditions before, during, and after the fires. Monitoring can be divided into three different procedural phases.

The role of remote sensing in this first stage of checking risk conditions is particularly focused on the generation of critical variables to estimate ignition and subsequent propagation.

NASA scientists specify that forest fires are the result of a complex relationship between atmospheric and weather conditions and ecosystem processes. In this regard, different studies have indicated that the frequency, spatial extension, and duration of the fires show a close link to the climate variability at the interannual to decadal level.

In the NASA training course “Observations of Satellites and Tools for the Risk, Detection and, Analysis of Fires,” it is pointed out that the probability that an area begins to burn is stipulated by collecting relevant factors that influence the sparking and behavior of fires. To this end, detecting certain warmer and drier weather patterns, extensive accumulation of fuels, record air temperatures, or wind speed through satellites is essential in a phase as critical as the prevention or mitigation of fire risks.

Vegetation, due to that fact that it acts as fuel for igniting, propagating, and intensifying the fire, is another factor to be considered in the risk assessment of this type of accident. Its assessment through remote sensing systems provides the opportunity to analyze metrics of such influential factors in this first pre-fire stage, such as typology, health, extension, density, altitude, or humidity.

Therefore, land coverage and vegetation indices are two of the formulas most used by NASA to identify and determine flammable materials. But they are not the only variables to consider. Analysis of the topography with conclusive components such as elevation, slope, and direction of the slope will also help in the designation of the space that the fire has to maneuver.

NASA indicates that ignitions that originate at the bottom of a slope have more space to expand. In these cases, the heat that precedes the carbonization preheats and dries uphill fuels, contributing to the acceleration of the fire.

Likewise, thanks to remote sensing, barriers capable of slowing the spread can be pinpointed, such as rocky outcrops or lakes.

Some analysis systems, such as Firecast used by NASA in this phase, provide near real-time monitoring products with alerts that include fire hazard specifications within the area of interest, image-mapping showing the risk location, and data to import into Google Earth.

The process of locating active fires has evolved considerably in recent years. In many territories, fire spotters in lookout towers have given way to detection through satellites thanks to smoke measurements and temperature or light anomalies.

Most active ignition detection methods from satellites are based on the thermal contrast between the unaffected soil and the heat source; they use mid-infrared sensors. However, algorithms designed to detect these thermal anomalies have some limitations. NASA warns that false positives can occur; large fires can go undetected due to high smoke density or smaller ones can fail to be detected.

Furthermore, remote sensing presents other uses thanks to its ability to calculate the aerosol index with information obtained through the selection of spectral bands for smoke detection. It can differentiate between smoke and dust and assign different labels depending on the type (smoke, dust, volcanic ash, clouds, and snow/ice).

Likewise, the optical thickness of aerosols, determined by optical depth, is used by the scientists at the U.S. agency to determine the amount of light removed by dispersion and/or absorption during its travel through a medium, checking the amount of particles present in the atmospheric column (from the surface to the outermost layer of the atmosphere). The value is established in terms of the particle concentration, its size, chemical composition, location in the atmosphere, and the measured wavelength.

All of this data provides significant revelations for air quality verification. We must bear in mind that, as the NASA training course points out, smoke from fires is an important source of trace gases and aerosols or particulate material, representing 50% of global CO emissions, 20% of NOx emissions, 40% of black carbon emissions, and 74% of organic carbon emissions.

The agency’s and other entities’ air quality forecasts collaborate in the important task of detecting public health alerts. They also serve as warnings about visibility/haze and to establish the need to temporarily reduce emissions by environmental regulators.

The evolution of forest fires can trigger lasting impacts on human lives and surrounding infrastructure. The release of carbon dioxide and soot particles into the atmosphere with their resulting influence on the climate, modifications in soil chemistry and the immediate reduction of soil fertility, the destruction of vegetation causing increases in runoff and erosion, their impact on the cycling and flow of nutrients, and the destruction of ecosystems and fauna are some of the main impacts NASA describes.

In this regard, water resources are usually one of the resources that are globally most concerning as they are greatly impacted, both in the short and long term. In the first scenario, erosion and runoff resulting from the fire transport sediments, waste, and chemicals to streams, lakes, and reservoirs, directly affecting the quality of drinking water. Meanwhile, in the second scenario, carbonization can alter the characteristics of the hydrographic basins and storm flow patterns.

Forest fires devastate everything in their path, leaving the soil burnt, sterile, and unable to absorb water. As a result, subsequent rainfall and increased runoff can cause sudden floods, debris flows, and even collapses. The risk of flooding remains high until vegetation is restored, which can take up to five years.

NASA underlines how recent literature shows that even rainfall with recurrence intervals of one to two years can cause debris-flow activity. Based on the severity and topography of the burnt area, the evaluation of post-fire debris flows by remote sensing may help calculate the probability of this occurring. These parameters will be used to establish decision limits, which, as the experts point out, must be determined to find the optimal relationship between true- and false-positive occurrences.

On the other hand, so as to provide a more favorable perspective, the data obtained from space can also play a part in predicting vegetation growth. At this point, flora indices and soil classifications use images to assess regeneration and condition at various stages following the damage.

This will be done by implementing a pattern of succession that will vary depending on the periods and plant species of each type of forest. Furthermore, the foliage growth mapping allows NASA tools to characterize vegetation based on changes of the dominant type, indicating the presence of new life and detecting new growth.

A world of possibilities

Although the operational use of satellite data in the prevention, detection, and evaluation of fires still has limitations, the abilities of this technique have great potential.

In this way, remote sensing makes it easy to cover large swaths of territory at systematic time intervals, providing a much more comprehensive spatial vision. Furthermore, the recording and transmission of this data is done digitally, enabling its processing through computer equipment and ensuring automatic, rapid, and reasonably objective processing.

Additionally, different systems can easily connect to other spatial databases and generate integrated products. The entire future in the functionality of satellites, as already stated in the article by Nanosatellites: the future of space communication, also takes place in the management and mitigation of fires.